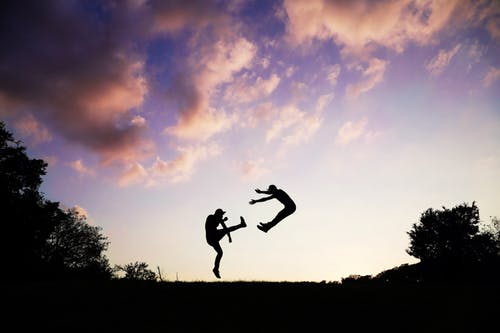 5 Signs That You’ve fallen for a Bipolar

While some say it’s not a severe case, living with a bipolar person tends to profoundly impact your life.  It’s a manic depression marked by sudden shifts in mood.   If you’re in a relationship with a bipolar, it will be more likely that he won’t be able to maintain his relationship with you in some cases, as he might have trouble managing his everyday life tasks.

If you see yourself in any of those hints, just drop the gun (run away).  My advice:  change countries.  Don’t worry, everyone handles relationships and breakups in his own way.  Look at it this way, you might like some of the bipolar reactions!

Here are the 5 signs that you fell in love with a bipolar and need to figure out your relationship.

Forget about the activities you once enjoyed together.  In addition, you see yourself ditching every event you are invited to. Forget about those couples’ night-out, or friends’ invitation for a glass of wine.  If you’re a sociable person, you may not be happy staying home watching television every night.  I mean it’s nice to spend an evening on your favorite Netflix movie with a bowl of popcorn or ice cream, but believe me, not every night!  You’ll even forget yearly family traditions or feasts, he’ll never attend; you just have to drop the argument and go alone.

2. He Can Hardly Sit Still

Every morning I wake up wishing I’ll have enough energy to finish up my day after long hours of work.  But once I go to bed, I treasure the moment I lay my head on the pillow and close my eyes.

If you’re in a relationship with a bipolar, forget about that!  You envy his energy for a while, but at a certain point, you wish he disappears all of a sudden.  All his ideas and arguments come out at bedtime when you’re looking for peace of mind.  I’ve been there and I know what I’m talking about!

3. He is always right

Yes! This is the worst of all.  He has an over confidence. When you’re in an argument, you’re never right, even with proofs.  Try to convince him if you can.  It’s easier to reach Mount Everest than to win a fight.  I always give up and leave him to argue until he calms down.

“My psychiatrist said “you’re BI Polar. I said “tell us something we don’t already know”.”

During this truce time, grab the opportunity to prove your point before his mood switches back to negative, which usually lasts few minutes before getting back to normal again, and so it goes.  Despite the fact that he’ll never let me win the argument, it’s enough that he stops quarreling; I am satisfied.

4. I Can’t Calm Because I’m so Freaking Excited!

You will love him for that… but to a certain extent.  When he wakes you up early morning of every day or late at night to prove his love for you, or when he never quits until he gets what he wants, your frustration in time increases and you’ll hate everything related to hunka chunka.  OK, not that much, but sometimes you need your space!  Living with a bipolar, forget it!  The positive side here is his openness in intimate bonding.  His ideas are so wide that you might find yourself exploring your fantasies.

Nagging is the worst of all.  No matter what you do, when his mood changes to negative, he is never satisfied with anything around him.  He even nags if the fly buzzes.  In that case, you should avoid contact as you might end up in a nasty argument between you two resulting in fast decisions which you’ll both regret later.  Just avoid being around him and he’ll get back to his senses.

“If you want to see the stars, you must be willing to travel through the dark.”

Only the people who are close to Bipolar individuals will understand the true meaning of living with one.

Are you living with a bipolar?