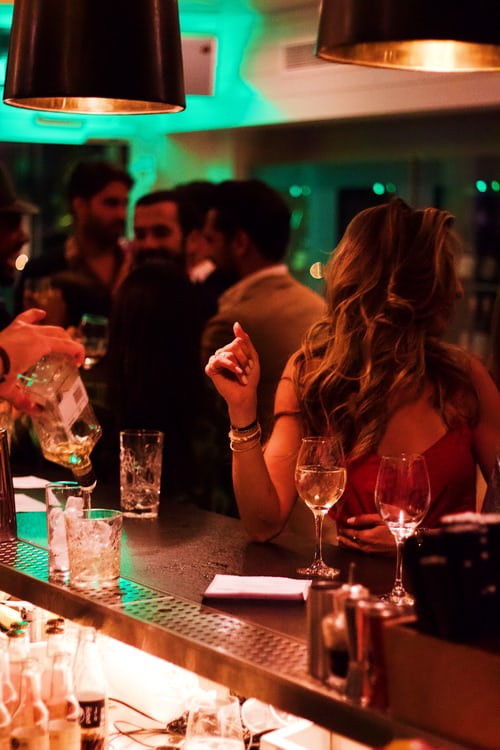 Here’s How to Define a Man from His Drink

Were you ever in a bar enjoying your drink when you spot a man across the place interestingly attractive, and suddenly imagined yourself laying in bed with him or standing next to him in a white dress at the altar?

You need to have at least a slight idea about his character before reaching Neverland.

The drink doesn’t necessarily define the character of the man, but it surely gives you the first impression about him.  Sometimes you’d be amazed how a man orders what you don’t expect him to.  But it surely says something about him.

Here’s what I think of a man when I see his drink order:

Gin and tonic! It’s a smooth drink he’s having there, keeping it velvet. I don’t doubt his manhood.

But he is more likely to have an anti-social behavior, inconsiderate or manipulative.  Should I turn away? Do I like to manipulate or be manipulated?

Well, he is obviously a rich old man, he doesn’t get into bar fights, but more like bar disputes… civilized!

Gin and Martini! Would I like a classical old spirit to marry me, have kids with me, and live Sunday barbecues for the rest of our marriage life? Oww, documentary channels every night too?  Nope, I’ll pass.

Whether he’s ordering it straight or on the rocks, as long as your choice is whisky, you want to check out my sexy lingerie?

He is drinking the sexiest drink a man can order.

Oh! he also knows which brand he wants!  Simply wow! He seems so confident and know exactly what he wants in life.

He seems to see the splendor of things and take all his time to value everything.

Well organized too!  “your place must be well fixed, not for the sake of pleasing, but because you like it this way. “

Whisky is the right combination of standard and crazy.  As amazing as he is in life, I bet he is more attractive in the bedroom.

But wait! He’s down to his sixth drink!  “Please stop drinking!  the confidence I like in you is becoming over confidence… turn away! turn away!”

He’s alone drinking a glass of wine, he must feel extraordinary about it.

“Even when your wine is a low-class cheap one, you still look classy. “

“Ok, fine.  Part of your personality is revealed, the glass in your hand gives vibes of your special style. “

But there’s a dilemma here. Although it’s sexually appealing to watch him talk about how well he knows wine and the way he confidently opens it, still, if he’s ordering a glass of wine at a bar, that leads to sophism.

If he orders a glass of wine on our first date, ok fine.  It’s kind of sexy and wise, pretty attractive. He’ll look classy, especially with a glass of Prosecco, although I don’t want to disappoint him, they say it’s a girl’s drink!  But I don’t care.  I love having a glass of Prosecco with my first date.

But, if every time we go out he enjoys a glass of wine, this raises the question: “Napoleon, do you have an issue with alcohol? “  In other terms, to me, he looks like a ninny in a daddy suit.

A Jeff Bridges – The Big Lebowski

Here’s another man, a grown one, drinking vodka.  I surely expect a Baby Foot table in his garage.  Very exciting!  Don’t want to vomit in my bed.

Vodka with Soda or juice? his stories must be better than any other man at the bar.  “But to keep your man cards, you should have the one suitable vodka-based drink Sir: Vodka/Soda.”

A Georges Clooney- From Dusk till Dawn

Tequila straight, not tequila shots!  Well that tequila man can hang around with whisky man easily being as ambitious as him.

He seems adventurous and frisky, he obviously has more time for a wild night.

“It looks like you’ve been through drinking and driving, or got busted for swearing at a police officer. “

Apparently, he knows exactly what he is doing.

But as I’m a romantic kind of person, I wouldn’t get closer.  He’s nowhere near romance.  I just have to put on my dancing pants and join him.

A Johhny Depp – The Rum Diary

“Are you the master of cracking stuff? “

Obviously, he doesn’t need company to enjoy his drink, I totally understand.  Anyway, it seems a poetic night is a legend for him.

He’s definitely a bore in bed.

“Please! I don’t want to hear your story all over again. “

“I don’t want to wake up next to someone with a hangover. “

Cognac is some classy shucking fit.

It seems he likes to celebrate in any chance possible… by himself, even for the existence of life.

he looks like a lover to me.  He’s trying to be seductive… and it’s working!

He’s trying to look like a teenager with a wooooohooooo spirit with a group of friends.

He’s an adult having the feeling of “turning it up” at a birthday party in the courtyard.

Or he’s unquestionably a parent who’s like: “Screw wine, we have kids and we want to drink! “

Told ya! It IS a girl’s drink.

He’s got taste, but he seems a budget freak.

“Are you kind of dead inside?  Your drink says so.”

Oh! Classic martini! Although not too exploratory, he can be a keeper if a woman is classical… just classical!

So he’s not a “model and bottle” man, therefore don’t expect too many surprises.

A Will Forte – Beerfest

Domestic beer? Where am I? It seems I’m not in a fancy bar.  Is this a cheap domestic beer??

He’s clearly a consistent and boring partner who doesn’t like new things.  Sir, have you no taste or are you a callow?

If I date this guy, my best date would be a fast food restaurant, not ignoring the part where I should put on my heavy make-up and wear my very tight and short skirt to impress him.

Girl, just turn around and enjoy your drink peacefully.

Another man with Craft Beer! Well, a step higher than domestic beer.

He seems to care about what people think of his drink. It’s not a bad thing, but again, having beer in a bar is like wearing some jeans to a gala dinner or going to The Counter Burger on a Wednesday.

But let’s be positive, he’s a solid boyfriend.

A Will Ferrell – Old School

“Beware the man who orders shots at the bar”, that’s what my aunt always repeated to me.

Is he looking to get drunk that quickly? Doesn’t he care about the rest of his night? Boooringggg!

As the joke says:

My wife rushed into the pub last night as I was with the boys killing shots of Tequila.

As you can see, I care about a man’s drink to build my first judgment. So next time you’re at the bar, will you also do this ? let me know if this method is useful.

Do you find it easy to meet someone in a pub?

Is there a better place to meet that special someone?